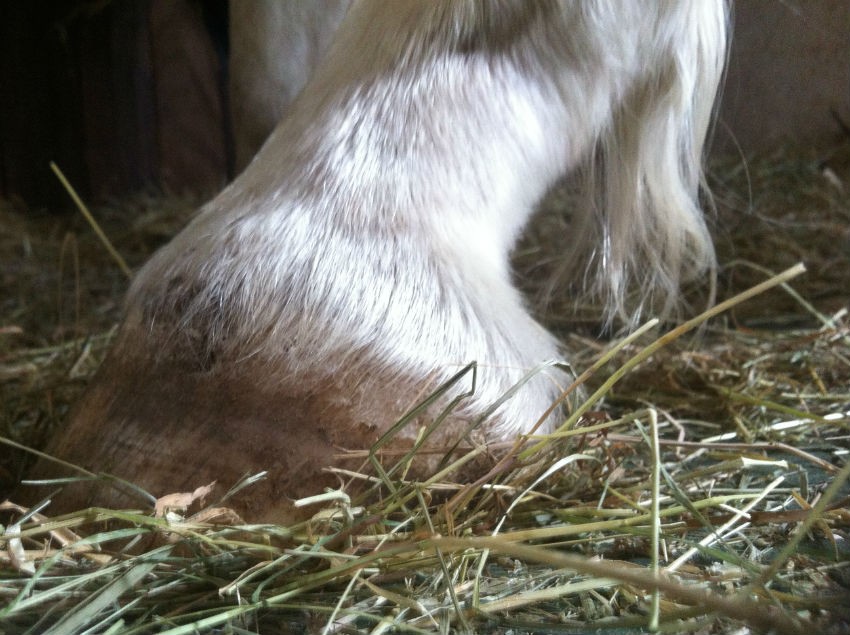 A couple of weeks ago my horse Wraheem first started showing a slight foot soreness, occasionally tripping or appearing to tread on a stone and be lame a couple of strides.  I also began to notice his posture changing a little to that of standing with his hind legs further under him than normal and almost trying to avoid loading weight on his heels.  He wasn’t lame but was over a two week period standing more in this posture like an elephant on a drum.

He is barefoot and has been for many years although only recently transitioning to an actual barefoot trimmer from my usual farrier.  Wraheem has had a lot of issues. He is a great teacher because of this as I have been led down many holistic and conventional paths in the quest to restore him to full vitality and health.  He also mirrors me a lot.  We both frequently have the same issues going on, but thats all another story and a very long one best dealt with in bite sized chunks.  For this current subtle change in Wraheems posture and foot sensitivity I was initially worried it could be laminitis, but it didn’t quite add up with him avoiding heel pressure and tow landing as normally you would expect a laminitic horse to try to relieve the toes. 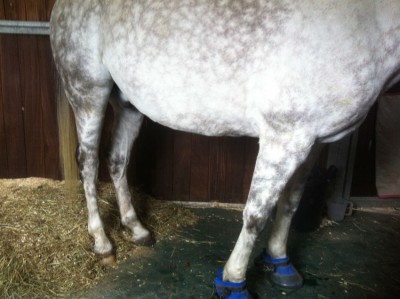 I began doing foot soaks on him which he obligingly stood happily for in his blue wellies full of warm water containing epsom salt and Dynamite Instant minerals.  These are great to draw out deep seated bacteria and help with bruising.  I gave him some arnica in case it was bruised heels and made up an essence for him to help with detox.

You can see from the picture on the left how he is standing very base narrow and even his hinds are up on his toes.  Whilst he was relaxing in the boots which I left on for half an hour he was dozing off and I used my Photonic Therapy torch to go over the wellness points, then the laminitis points an some over the lumber back area which was very tight from standing in this posture.  I did this for two days and he seemed very relieved and standing more normal the last evening.

The next morning though when I went to turn him out he could hardly more and was severely lame on his left fore unable to weight bare on it at all.  On closer inspection I could see a huge difference between normal coronary band and the affected leg. 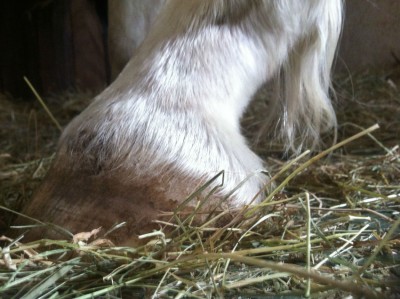 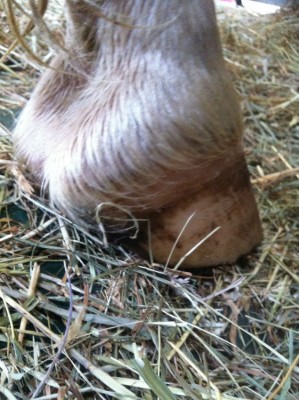 It was clearly an infection that had travelled up the back of the heel into the coronet band.  The foot soaks had obviously acted like a poultice in drawing the infection to the surface.  Because he was in such pain I called the vet later that day and he found a tiny crack at the front of the hoof which he quite aggressively cut away to relieve the pressure.  I was a little concerned as now Wraheem had a hole in his sole at the toe about the size of a 5 pence piece which bled profusely and no sign of any puss.  The vet felt the crack was the entry point of the infection however and that it had tracked all the way back under his sole to fill at the heel and ultimately up the back of the coronet band.  He had to wear a poultice which was Animal Lintex padding soaked in hot water. I continued to add the Dynamite Instant Minerals to the water too.  I had to change it daily for about a week in all.  Once he was no longer lame on it I packed the hole with Red Horse sole paste and continued to put a hoof boot on for turn out.

Standing in such a tight compromised posture for so long in pain caused him to still be quite tight in his muscles especially his hamstrings and over the loins.  Luckily this coincided with the Craniosacral day and Wraheem was treated to a session.  The change in his posture was really clear afterwards.  He was a lot softer, able to stand square again and able to lift each hoof more freely and without trying to pull them away.  His stride was longer too. 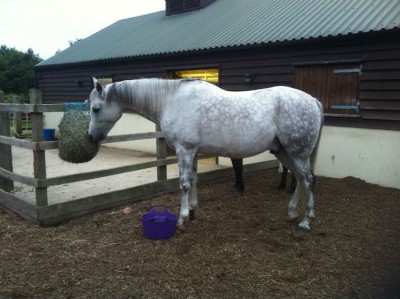 One should never underestimate how the acute pain of an abscess in the hoof can affect the horses whole posture for some time afterwards as well as when its manifesting and is first discovered.  Since this incident I have been riding Wraheem again and we even completed a 7 mile pleasure ride.  However just the last few days he is once again seeming very tight in his body, toe landing again and a bit foot sore on stones.  I m limiting his grazing and managing him as if he has metabolic issues and hoping foot abscesses are not going to become the norm.

If you find yourself with a similar predicament with your horse, I have a range of natural products available that may assist.  Always consult your vet first if any condition becomes acute and the horse is in obvious distress and pain.