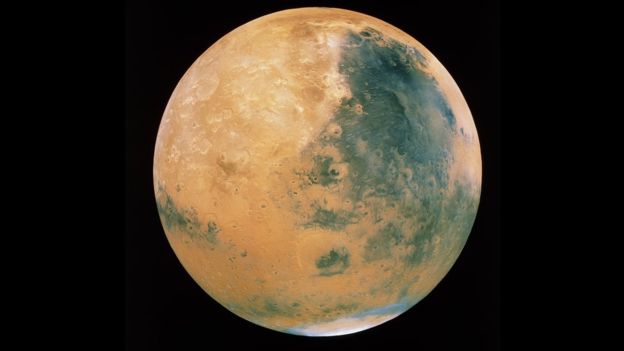 Essence Making the Night of the Lunar Eclipse 27th July 2018

Some months ago I was guided during a consultation with a colleague from the Netherlands to make at least three essences several weeks or months apart, by a very large and significant Oak Tree on our property.  He suggested I take time on my morning walks to sit a little by the tree and feel what comes to me. This tree he said was very connected with the land and environment here and played a big role in cleansing and transmuting energies from the Earth and Universe. The essences were he felt primarily for me personally and also to given to all the inhabitants here with some given back to the land and the tree.  It was to help us be really connected to nature and our environment and teach us how to allow disharmonious energies that had been affecting us to be cleansed the way the trees do. Creating my own essence range would come in the future he said, but this was needed for me right now.

To be honest I thought I already was pretty connected and in tune with the natural environment, but the consult with Koen was pretty amazing and I was keen to follow his advice.  For a long time I seem to have been constantly trying to fix myself. My husband and the animals too. Its been quite a journey that have led me to work with some amazing healers, teachers and mentors with some weird and wonderful experiences. Perhaps I will write about that another time.  So the three essences I have made so far have all been easing me along with some personal growth and I have been seeing changes in the way of BE ing in me and the horses.  My husband and Dogs also had some of the first one I made back in April this year.

Despite knowing about the Lunar eclipse and the Full Blood Moon on 27th July during that day I only briefly wondered if I should make another essence.  That day it was still over 30 degrees in the drought we had been enduring here in the UK.  I was feeling it was becoming desperate as I looked at the parched land.  The grass was brown and dead, even some of the bigger trees were dropping leaves now and the soil had developed large cracks.  For weeks we had been trying to keep the 1000 saplings we planted back in the Autumn alive by hand watering them all with water pumped from our pond which luckily was spring fed so hadn’t dried up. We had lost some fish due to the high temperatures and lack of oxygen in the water. The dogs and horses were struggling with the heat and although it was lovely to have a proper summer it was not balanced with any rain.  We had only had a couple of showers over the farm since the beginning of May and any predicted rain kept missing us as the showers were very localised. I looked at the Oak that afternoon and sent a thought of should we make an essence and at that point felt I don’t think so. I just wasn’t feeling it.

Then The Storm Came – All Systems Go

It must have been around 9 pm as it was getting dusk and certainly the sky had darkened with storm clouds.  Then the lightening came and some almighty crashes and flashes and rain at last.  I suddenly felt a strong sense of urgency to run down to the Tree and make an essence. It was like someone was saying “Now, Do it Now!!” So like a crazy woman I grabbed my essence making bowl and in pyjamas flew down there in the pouring rain.  Standing under the shelter of the tree and in the cover of the wooded walk way I was able to connect with the nature around me and witness the storm unfolding whilst Co Creating the forth essence on the night of the Lunar Eclipse and Blood Moon.  ( I know standing under and touching a tree during a lightening storm is really not advisable! But I felt perfectly safe and meant to be there ) 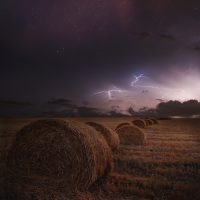 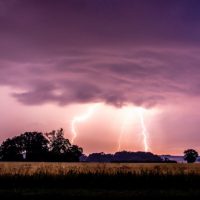 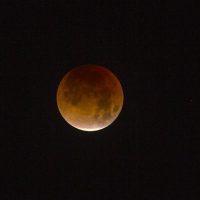 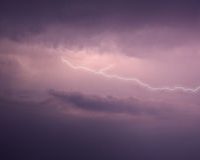 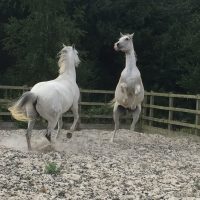 The Power of Horses 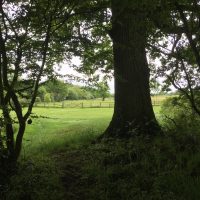 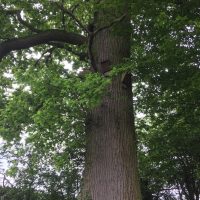 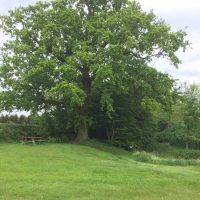 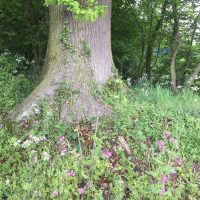 Nature around the Oak 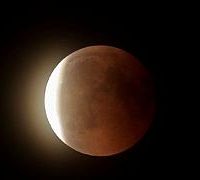 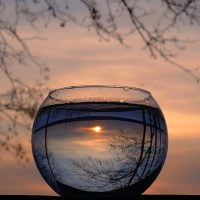 Energy in a Glass Bowl

The images above I have used to try to capture the essence of what I was feeling and what was happening around me.  Some of the images are my own and some are royalty free stock images as I didn’t take a camera at the time.

My Observations and Insights – What is This Essence All About

Even as I was running down to the Tree I pictured the long drought and felt the cool rain on my face and the words perseverance and endurance sprang to mind and pushing through. Standing under the Oak I mentally sent a request out that we could Co Create a special essence this night with the energy of the storm the great Oak and nature around me that is the farm.  It was all happening so fast I hadn’t had time to really connect and set my intention or meditate on what this particular essence was going to be for so I asked that I be shown over the coming days and during taking the essence.

My senses felt heightened and I felt so alive. Pink sheet lightening left a soft pick glow behind the grey clouds, as a sharp wind picks up and cool rain begins to thunder on the canopy of leaves above me. Every now and then there is a flash of lightening and a thunder clap, the air is so fresh and charged with negative ions. The brook beside me is running faster and the sound of running water, wind and rain, thunder and lightening and the leaves above me make my senses feel sharp like an animals. I see the horses in the field and think of their power. They are actually just grazing but I see them in my head as they were the other day in the image above playing and feel their power.  As the thunder crashes I see them rearing and full of energy.  I lay my hands on the Oak and can feel a buzz of energy pouring down her trunk into the Earth and as I allow myself to connect with the tree I sense the energy spreading everywhere through an etheric energy web. I see another large Oak in the distance and instantly see the alignment of them with other large Oaks on the farm and see the connectivity of them all and of that with all the trees and am reminded of the alignment of the Sun, Earth and Moon on this night.  I stepped out into the rain with arms open wide in the air letting the elements blast me.

My feelings for this essence are that it is to be highly cleansing and energising, a powerful catalyst for change but also a feeling of surrender and letting go of parts of ourselves that limit our greater potential.  It is powerful and action orientated, giving strength and perseverance.  Also about being in alignment of ones Soul and alignment with nature. Due to the cloud cover I couldn’t actually see the moon but her influence and significance of the eclipse were there non the less and I left the bowl out under the night sky over night.

Once back in doors I started googling about the Eclipse and found myself on a website of a lady from the USA that spoke about astronomical influences around this Moon. She mentioned the influence of Mars current location and how that gives masculine drive. The influence of the Asteroid Pallas is awakening a deeper insight into the divine feminine so this is a great time for women in particular to step into their power. She talks about a time for surrender of limiting beliefs, taking action and stepping into our own individual gifts and skills.  To be SEEN and Shine and Shine Brightly.

I m looking forward to taking this essence and seeing how things continue to unfold.