The clicker training clinic was a great success this bank holiday weekend.  We had a real variety of horses and ponies and a lovely group of people.  The weather was kind to us Saturday and a bit blustery and showery on Sunday so we improvised with a trailer and box for undercover viewing!

Due to the windy weather many of the horses were a bit on their toes and anxious.  Hannah showed participants how to get their horses to target a grid of cones or get their focus by following a target or being sent from A to B over poles or other obstacles. Some that had already had some prior clicker training already found it a comfort and safe place to stand on a small mat.

Some worked on things to help shape posture.  Moving shoulders was a common theme to help balance and straighten the horses.  Also to help keep shoulders and ribs away from the handler if the horse 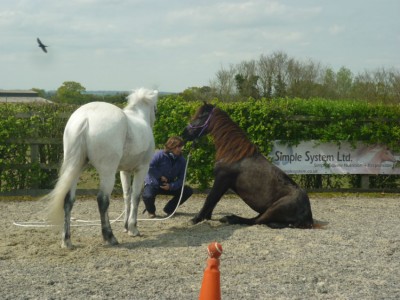 was tense and leaning in.  Some good ridden work was also achieved by some.  Help with better transitions and softness, motivation and straightness were all things we saw over the weekend.

There was time for relaxation and fun and games too.  Several were turned loose to either work at liberty or just to have some time out and they took advantage of that having a good roll and a charge about. 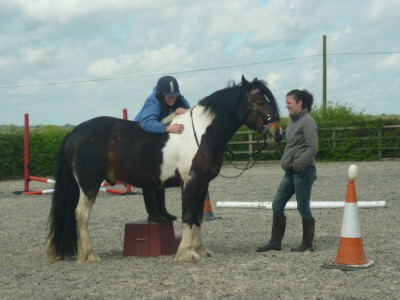 first day and it looked like backing him was not to be this time.  Helen had done a lot of preparation at home, but in a new place away from his friends he was a bit uptight and clingy to the other visiting horses that were paddocked next to him.  On the Sunday he was a different horse however, I hope in part from an essence combination I made for him to promote calmness, moderation ( of behaviour and energy in his case ), balance and focus.  A remedy for confidence for Helen too.

Some really interesting work was done in the stables with Phoebe who unfortunately developed an attack of Uveitis just before the workshop so Gemma’s hopes of riding her during the clinic went out the window.  It became a priority to be able to medicate her eye as she had been been given eye drops by the vet and was proving almost impossible to put the drops in. 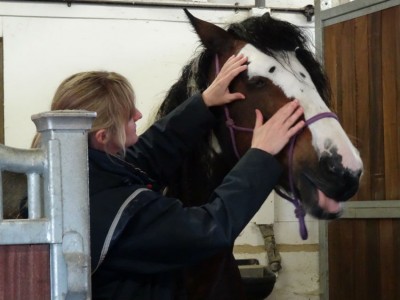 Hannah broke the process down into small stages and introduced a toy for her to target and roll ( A ball ) something she new how to do and was really easy and so could be reinforced a lot so it was fun and highly motivating.  Then would go back to a tiny bit of approaching the eye first with one hand, then two, then right up to the corner of the eye and then with the pipette.  In between short sessions she would go back to the ball.  Great success as Gemma can now give her the drops.

Judith Knight had this to say:

“Just to say thank you so much for your hospitality at the weekend – the boys and I loved it and apart from learning absolutely loads it was great to be in the company of like minded people.”