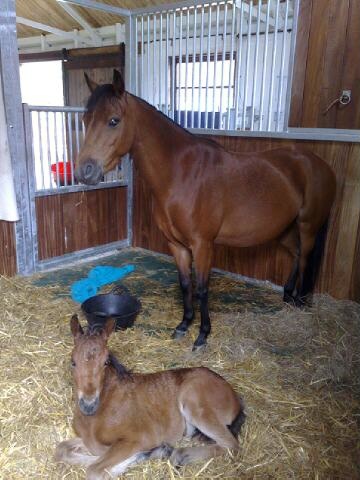 This article is about my experience with my pony Milli when she was expecting her first foal and some difficulties we had after the birth. Right from when we first decided to let Milli have a foal I began using flower essences to support the process.

I began with Alaskan Combination Essence Pregnancy Support and started this before she conceived.  The trip to visit the stallion caused me more worry I think, but I gave her some Mimulus for know fear as she was a little worried about travelling in the trailer. All went well and she conceived after her second visit to her husband. 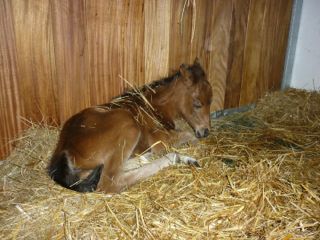 She actually had a very uneventful pregnancy which I would like to think was partly due to the Pregnancy Support Essence.  The birth went well too and when I went out to the barn the morning after a heavy storm there was this tiny filly foal we named Scarlet.

All seemed fine at first, but by the second day Milli was becoming reluctant to feed Scarlet who seemed to be ravenous and constantly wanting to feed.  She was very long legged and seemed to be having trouble reaching the udder and was getting frustrated. Milli was getting frustrated too and on inspection of her udder it looked very full and sore. She also had not passed the placenta which needs to come away intact or can be very dangerous to the mare. We had the vet out in all three times over the next couple of days.  He administered oxytocin injection to help Milli expel the placenta. She had also been showing signs of colic.  I had been spending the whole time supervising feedings as Milli had started squealing and trying to kick the foal every time she tried to feed. I was spraying Soul Support in the stable and whilst waiting for the vet on one occasion when Milli was colicky was doing Equine Touch moves for her. I was tired with all the lack of sleep and worry so wasn’t really thinking about more specific essences.  Following on from my previous post about how our emotions can affect animals, was my anxiety contributing to the downward spiral of Milli being reluctant to feed the foal?  She was getting anxious every time Scarlet went near her because she was sore and was in pain and Scarlet was getting anxious and bewildered when her mother was telling her off and pushing her away.

The vet suggested now the weather had improved that we turn them both out and maybe if the foal had more space to run about and explore that Millis maternal instincts would kick in again and she would allow her to feed without me holding her.  At this point a thought popped into my head for the flower essence Green Bells of Ireland.  This is a lovely essence and such a nice one to give a new born as it connects them to nature and shows them the huge support from nature. I felt it was quite a key essence as the birth and first few days after had out of necessity been confined to the barn and had to have human intervention from the vet, drugs and interference with the bonding due to Milli not wanting to feed her foal. I also gave them both Grove Sandwort which helps the bonding and nurturing process and the connection between mother, offspring and the Earth.  This is a key essence in the Alaskan system for animals especially where that bond and connection is missing and in poor weaning. I’ll talk about that in another post.

Scarlet was a bold foal and couldn’t wait to explore and stretch her long legs and sure enough when she started cantering about and the other horses all rushed to the fence full of excitement over the new arrival Millis protective and maternal instincts kicked in and she was following Scarlet everywhere and very soon letting her feed happily.  Both became relaxed and all the tension that had been present in the stable disappeared. 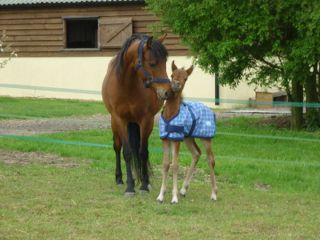